Michael Poole, who owns Blue Collar Artisans in Easthampton discusses two of his major art projects, one whimsical, one serious, which were the subject of a recent Advocate cover story. Since the spring, Poole has been arranging Playmobile toys to make small scenes around his community and taking photos of the results. At the same time, he has been constructing and welding a six-foot sphere of nearly 15,000 metal washers, each of which represents a victim of gun violence over the past year.

In some ways, it all started with pothole season. 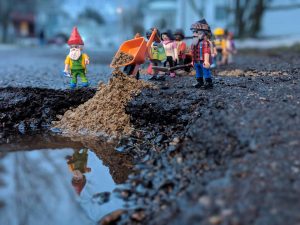 “People were on the Easthampton Facebook page complaining about the potholes. None of it is new, but then it took this turn about how the DPW (Department of Public Works) sucks and nobody is doing anything about it.”

Michael Poole, 49, of Easthampton, decided he would try to lighten the mood. A welder and an artisan, Poole has made art from metal in the past, but he decided to try something a bit different to add a bit of whimsy into the Easthampton pothole discussion.

Poole had sympathy for the city workers, but rather than get into a heated exchange on social media, he headed over to A to Z Science and Learning Store, a toy store in Northampton, and picked up some Playmobile toys. He then drove over to one of the potholes and arranged the toys around it and photographed the result. 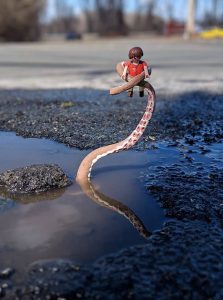 Posting the photos to Facebook led to a general sensation, and a continuing series featuring these toys, particularly in potholes. In one image, a toy dumps sand into a pothole with a wheelbarrow. In another, there are divers next to a big puddle doing a cold-weather dive.

“The whole point was to lighten the mood. One had a ‘Kracken’ arm holding someone coming out of the pothole,” Poole said recently at his Easthampton workshop. “People were laughing about the potholes.”

At first, Poole was nervous that his social media photo series would anger city officials — then Western Mass News did a story on him and spoke to Easthampton Mayor Nicole LaChapelle about how to treat potholes.

“Dragging the mayor into this was not my intention, but luckily everyone got the right energy from it,” Poole said.

Eventually, as the DPW began fixing the potholes later in the season, Poole turned his attention to other scenes around Easthampton. One photo features characters at opening day at the Brass Cat.

“I generally have a pair of them in my pocket and take pictures of whatever’s happening at where I’m at,” he said, adding that there are more than 100 posted to Facebook at present, and he is regularly buying more Playmobile characters all the time. 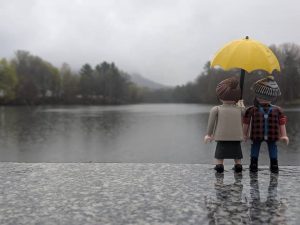 A favorite non-pothole related picture was taken during a seemingly unending stream of rainy days — it features a couple looking out on a lake in Easthampton, with a female figure holding an umbrella sheltering herself and a man in plaid. People have told Poole it looks like him and his wife, Annie.

Other people have told him about their own favorites. While the Kracken image is popular, people also like any of the ones with pirates in them, or ones that refer to television shows. In Poole’s mail attached to a package came an unexpected note from the person who delivers to his house — “hope it’s a letter carrier.” 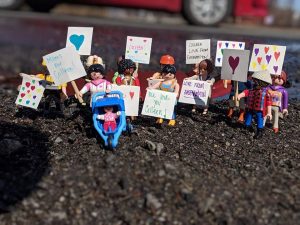 Some have been particularly meaningful to Poole. After receiving a message from a woman who said her son was dying and she was taking care of him and that she was enjoying Poole’s photos, Poole made a scene just for her, complete with signs of support.

“It just felt like for me an easy thing to do to reach out to someone missing her community and going through this unbelievably difficult time,” he said.

Primarily a sculptor and a welder, Poole said it’s difficult to pin down exactly what he is doing with his art in general. In the past, some of his art has celebrated his community. He’s the one who created the “01027” bike rack in the center of Easthampton, featuring the city’s zip code. He also created a piece for Art in the Orchard in 2017 with 30 Easthampton community members made of rebar and other metal materials. 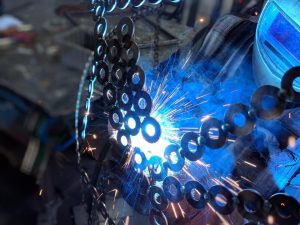 What he has in store for this year’s Art in the Orchard is something bigger, both physically and regarding its subject matter. Poole is constructing a six-foot diameter sphere of washers — one for each victim of gun violence in the United States during 2018 — 14,718 in all.

“I left out gun suicides, but that’s only because the number is beyond imagining and it also needs its own piece,” Poole said. 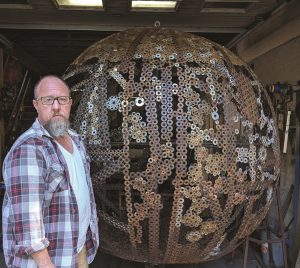 “I had a bag of washers in the desk and I measured the thickness,” he said. “If I stacked them up, it would be 162 feet tall. That was mind-blowing in and of itself, but I couldn’t stack that high. I needed to figure out some other shape that could hold more but also be visually impacting, so I went with the sphere.”

Poole stuck with washers as a medium because they are easy to come by and easy to weld. He’s been asking people to donate washers and people have been dropping them off and mailing them to him over the past several months. He has had washers come in from as far away as Kansas, he said.

Poole has also had washers donated as a result of his Playmobile images on Facebook, he said. Members of activist group Mothers Demand Action for Gun Sense in America saw one of his photos and got wind that he was looking for donations for his sphere project.

Poole is still accepting washers and still in the process of building out his sphere. As of June, the number of gun violence deaths had reached the number of washers that were on the sphere. 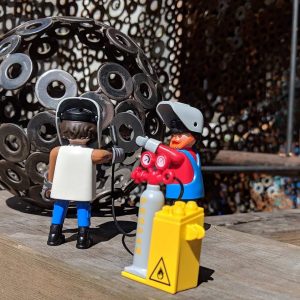 “The tragedies with the school shootings are horrific and huge, but what I realized is the average is about 35 to 40 people a day — we don’t know their names, and we’re not seeing that stuff on the news,” Poole said. “I suddenly had this realization that as tragic as those mass shootings are — and they are making people pay attention — this is happening every day all the time.”

Poole uses Gun Violence Archive, a nonprofit organization that gathers data about gun violence in the U.S., for his count. As of late July, the number of deaths had passed 8,000 in 2019.

Gun violence, particularly suicide, is personal to Poole, who said he had an aunt who committed suicide using a firearm. He speculates that the numbers of suicides with guns is much higher than is reported — his family kept that information out of the news, he said.

“For a suicide, things are a lot quieter, more hushed up, and they are harder to track in that way,” he said.

An artisan for his community

Poole’s path to being an artisan was not a direct one. At Springfield College, he studied psychology before going on to study welding at the Baron Institute of Technology in Windsor, Connecticut. Then he went to Diver’s Academy in New Jersey and trained to be an underwater welder to work on bridges. When he got married, he realized with this dangerous work it was difficult to get life insurance, and so he changed career paths again, doing welding in other people’s shops before eventually taking the plunge and opening one himself.

Now, Blue Collar Artisans has been around for 13 years and employs several people.

And that psychology degree? Poole said he gets use out of it every day.

“My wife calls the shop, ‘Mike’s home for wayward boys,’” Poole said. “They’re guys who want to make something and do something and learn how to weld, but are also thoughtful people who probably wouldn’t do particularly well in your average welding shop.”

As far as what lies in the future for Poole, he said he’s always learning. It’s been a rare year that hasn’t seen Poole taking some art class to hone his skills — this year it was wheel thrown pottery.

“When I learn new skills like that, it helps in other areas,” he said. “I do believe in the beginner mind zen thing. That energy when you’re busy learning something opens up problem solving pathways in your head to look at problems differently.” 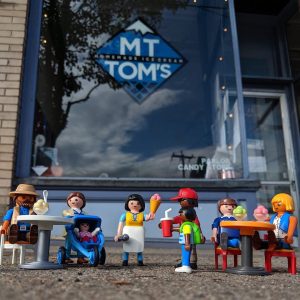 In the here and now, Poole has a show at Mount Tom’s Homemade Ice Cream, which features several of his Playmobile photos.

Jim Ingram, owner of the Mount Tom’s ice cream shop, said he came to be aware of the Playmobile project on Facebook and his favorite is the one taken in front of the ice cream shop.

“You’ve got figures eating ice cream and see my logo in the back — it sets the whole mood of the shot, and most of his shots are like this, too,” he said.

As an amateur photographer, Ingram said he appreciates the composition of Poole’s photos, as well as the fact that they are funny and whimsical.

“It has a statement a lot of times, but it is absurd as well,” he said. “It is interesting the way he sets things up. It sucks you in visually.”

Poole’s photos will be on display at the 34 Cottage Street, Easthampton, location though Thursday, August 8, according to Ingram.

Poole’s sphere, “Gun Violence Project,” will be at Art in the Orchard at Park Hill Orchard at 82 Park Hill Road in Easthampton beginning on Saturday, August 10. The following week, on August 17, Poole and other artists will be available to discuss their works.

“Hopefully everyone from pacifists to hunters and servicemen will go ‘Oh my gosh,’” Braen said. “It’s hard to quantify the magnitude of what goes on and Michael told me he couldn’t keep up — he didn’t have enough spare time to weld.”

Jean-Pierre Pasche, one of the co-founders of Art in the Orchard with Braen and Hartley, owner of Big Red Frame custom framing shop in Easthampton, is a member of the selection jury for Art in the Orchard. He said Poole’s piece met all the criteria to be selected and had a lot of support on the jury.

“It’s a beautiful piece,” he said.

For Poole, he is happy to be able to participate in his adopted Easthampton community. Being surrounded by people and places he knows has been vital to him, he said.

“I didn’t grow up here — I grew up in Connecticut — but I ended up calling it home, and this place is important to me,” he said.